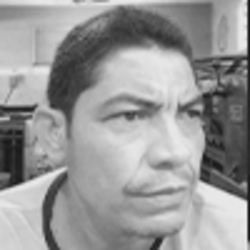 Martins was born in Igarapé Grande (MA), where he lived his childhood. He then moved with his family to Santa Inês (MA), where he spent most of his adolescence. At the age of 18, he settled in Marabá (PA), where he now lives and works as an art finisher in a printing shop. Despite his passion for drawing since his childhood, it was only from 2015 on that he became interested in oil painting and started taking some courses. He then began to promote his artistic works and to produce commissioned oil paintings. This was his first invitation to participate in an art show.

In his panel Arara Vermelha (Red Macow) shown here, he seeks to portray some features that stand for the state of Pará, including the flora and fauna, Marajoara graphic signs and a map in the background. Although he is used to oil painting, he took on the challenge of adding to the panel some aspects of urban art such as overlays, graphics and accentuated contours, using techniques he explored during the workshops of the Arte-em-Cores Project.